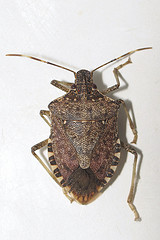 BMSB or more formally known as Brown Marmorated Stink Bugs have recently been the cause of alarm among farmers and residents in the Northeast and Mid-Atlantic states. These bugs are looking for warmer spots as winter refuge. According to the NPMA or the National Pest Management Association, “they are predicting a heavy stink bug season and encourages homeowners to take the necessary steps to thwart home invasions.”

Where Do Stinkbugs come from?

Stinkbugs are a native of Asia. BMSB spread were first seen in the United States in the mid 1990’s near Allentown, PA. Today stinkbugs are now found in 38 states extending from coast to coast, border to border, with their main concentration in the mid Atlantic region. “The Mid-Atlantic experienced long periods of sustained hot weather this summer, allowing stink bug populations to grow to much higher levels than we saw in 2011” explains Jim Fredericks, Technical Director,  NPMA. “Now that the weather is cooling off, there are more stink bugs seeking sites to overwinter.”

Stinkbugs may look nasty and scary but they “do not pose serious property or safety threats to homeowners, but their tendency to invade homes in high numbers can be a nuisance,” says Missy Henriksen, VP for Public Affairs, NPMA. “Luckily, there are steps people can take to prevent stink bugs from entering their homes.”

As the experts have said, Stinkbugs do not pose a threat to humans and properties but their massive number can be a nuisance and once you step on them, you’ll spend the rest of the day putting off that nasty smell. Stinkbugs however can be prevented from entering homes and properties.

If there’s a BMSB or Stinkbug infestation in your area, please contact All Pest Exterminating Inc. to assess the problem and provide immediate and effective solution.