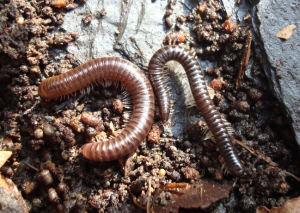 Millipedes and centipedes, contrary to popular belief, are not insects due to the fact that they possess more than six legs. However, they are considered to be invertebrates and are closely related to insects. When living outdoors, these creatures are considered to be innocuous, or harmless; however, if they invade indoor living areas, they may prove to be pests. Millipedes and centipedes have long bodies that are segmented. Millipedes have two pair of legs and centipedes have one pair of legs. While these creatures are similar, there are distinct differences – especially when it comes to their dietary preferences. Throughout this pest control guide, you will learn about the differences of these invertebrates.

Millipedes
Millipedes are invertebrates that contain two pair of legs on each segment of their body. These creatures typically reflect a brown or black coloring. The long body is rounded. There are no legs or claws on this creature that possesses any type of toxic poison. If disturbed, the millipede will typically coil up to protect itself. These creatures thrive in areas that are considered to be moist and have access to a high level of organic matter that they may eat. During the fall months, it is common for millipedes to move away from common feeding areas and invade structures, such as sheds, garages, barns, and homes. It is common to find the creatures in low and moist regions of the home, such as the basement. If the structure is dry, the millipede will likely die. It is not uncommon for millipedes to become attracted to certain plants and gardens. This is especially true if the areas where these plants are located contain a high amount of mulch and/or moisture.

Centipedes
Centipedes have one pair of legs on each segment of their long bodies, as well as a pair of claws behind the head that include poison. When handling their prey, the centipedes will use these poisonous claws to paralyze the organism. In most instances, small insects are the centipedes’ prey. While it is true that the poison could affect a human, it should be known that the jaws of this invertebrate are so weak that it is difficult to actually penetrate the skin of a human. In the rare event that a bite occurs, there is typically only swelling, redness, and mild stinging. Centipedes are most often found outdoors underneath various types of debris and organic matter. They prefer to hide in places that are moist and dark. If centipedes invade the home, they will be found in restrooms, in closets with a high level of moisture, and in basements.

Getting Rid of Millipedes and Centipedes
There are several techniques that may be used to rid your home of millipedes and centipedes. The first step is to take preventive measures. For example, mulch, dead vegetation, and other forms of organic debris should be eliminated from the area near any structures on your property. You may also create a barrier with an over-the-counter insecticide. Unfortunately, most over-the-counter products lack long-term effectiveness because environmental moisture dilutes the product. If you want to prevent and eliminate millipedes and centipedes with ease, you should opt to work with a professional pest control company. We here at All Pest Exterminating Inc offer a wide variety of effective and long-lasting solutions for millipedes and centipedes. Simply call us today for more information: 765-259-0043