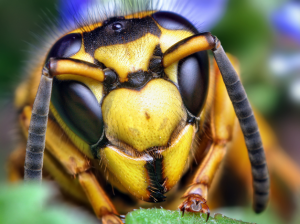 The Yellow Jacket Wasp – At a Glance

Many individuals refer to the yellow jacket as a “bee”; however, these insects are wasps. They are distinguished from bees by the thin waist that they possess. When at rest, the wings of these insects fold lengthwise. As mentioned previously, these are predator wasps. In essence, that means that they prey on a wide assortment of arthropods and insects. This makes them highly beneficial. These creatures are attracted to certain types of foods consumed by humans. Examples include foods that are sweet, as well as a wide assortment of meats.

Early in this guide, we outlined the fact that the yellow jacket wasp and the hornet are the two most aggressive outdoor insects when it comes to defending their nests. While the yellow jacket will not pursue people and animals without a purpose, when they do, they have the ability to leave behind a very painful sting. When a colony is present, the yellow jackets that are part of that colony will defend their space in an active manner. These colonies are typically only active for one summer season. Once the season has passed, the queen of the colony will move to another location in order to initiate a new colony. The wasps that are left behind will die and the nest that was left behind will remain inactive and unused. During the active period, if a colony is disturbed, the insects will become very aggressive and could sting. For most, the sting is only extremely painful; however, there are many that may suffer immensely as a result of an allergic reaction to the sting.

If you find that you have a yellow jacket colony in or around your home, it is important to take precautions if you attempt to kill off the colony. You will want to attempt to locate the nest. Identify areas where worker wasps are entering and leaving. You should then mark all of the spots that you identify. Once darkness has set in, you may start the treatment process. First, this is the period when the wasps rest. Second, they are unable to see very well. If you treat the colony at night, you are less likely to experience a sting. You may then use aerosols that contain pyrethrum to kill off the colony. This substance must be placed on the nest. Once you have sprayed this substance, allow it to dry. Then, place an insecticide dust on the nest. Use extreme caution when trying to eliminate yellow jack wasps. It is best to obtain the assistance of a professional pest control expert, such as All Pest Exterminating Inc. To set up an appointment, call: 765-259-0043