Common Hunting Spiders Found in and Around the Home – Part 2

Thank you for returning to our concluding installment of our series, Common Hunting Spiders Found in and Around the Home. Last week, you learned that there are two types of spiders that are common in and around residences – hunting spiders and web-building spiders.

Hunting spiders are most often found outside of the home; however, there are instances in which they will enter the home. Most of these spiders will not result in death if they were to bite a human or an animal; however, the bite could result in sickness and extreme discomfort.

We have provided information on crab spiders, fishing spiders, and jumping spiders. This week, we continue by expounding on the final four hunting spiders you may observe in and/or around your home -the parson spider, the sac spider, the sowbug spider, and the wolf spider. 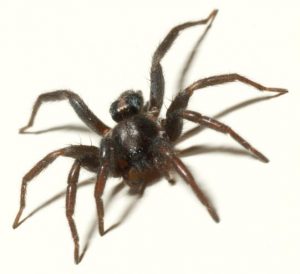 Parson Spiders
Parson spiders are medium in size and typically have a gray-colored abdomen with a brown body. These spiders have a white band of color that runs over half of the abdominal region. These arachnids commonly hunt during the nighttime hours. If they make their way indoors, you will likely see them more during the nighttime in obscure areas, such as underneath objects in the home, in crevices throughout the home, and cracks that are present in the structure. During the daytime, these spiders are commonly seen outdoors. They are likely to be seen underneath rocks and close to trees – especially in areas where loose bark is present.

Sac Spiders
Sac spiders are very rarely seen in the home. Instead, they are commonly observed on the ground or near areas that contain foliage. These arachnids may be small to medium in size. Typically, sac spiders are yellow in color, but, may be another light color. These crave small insects and will hunt at night. During the daytime hours, these spiders are most often observed hiding in tubes or sacs that appear to be composed of silk. In fact, this is why they are called sac spiders – because of their desire to hide in sac-like structures when they are not hunting. If these arachnids make their way into a home, they are most often observed near ceilings. Outdoors, they are most commonly found within leaves that are rolled up or underneath stones. 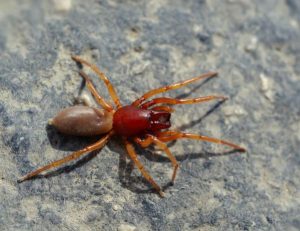 Sowbug Spiders
The sowbug spiders are often called “woodlouse hunters”. Many pest control professionals may refer to these pests as “dysderid spiders”. This is a spider that is medium in size. The coloring of this spider species is considered to be highly distinctive. The legs are typically orange, the abdominal cavity is commonly a grayish-white color, and the cephalothorax is usually a brownish-purple color. This type of spider is a bit unique in that it only has a total of six eyes. The fangs are very large and project significantly forward. These spiders most often dwell in the ground underneath rocks and other types of debris. They prefer certain types of prey. The most commonly hunted prey by the sowbug spider is pillbugs and sowbugs. They will, most often, hunt for prey during the nighttime hours.

Wolf Spiders
Wolf spiders are exceptionally large arachnids. They are typically brown to dark brown in color and have hair on their bodies. These are extremely versatile spiders – in terms of living areas. They may live in grassy areas, wooded areas, in gardens, in fields, and even on the beach. They are most often found on the ground, but, many may live underneath the ground. They are not designated as daytime hunters or nighttime hunters. They simply hunt when it is warm. These are one of the largest and fastest moving spider species found in and/or around the home.

In the future, we are sure to have a series that expounds on the most common web-building spiders in and around the home. The presence of spiders is quite troubling. While most spiders will not kill humans or pets with their bites, sickness and discomfort may occur.

If you have an issue with spiders, seek assistance of a professional pest control specialist to eliminate them.

For more information and for discounts on this type of service,
call us at All Pest Exterminating, Inc. today at: