According to countless hours of research, there are well over one million species of insects on the planet; however, entomologists agree there are still quite a few species out there that have yet to be discovered and studied. That includes some of the weirdest insects.

Nature is consistently surprising humans with its vast array of wonders – especially when it comes to the expansive collection of insects that currently reside in our world. Statistics indicate that insects account for over half of ALL of the living organisms within the world. In this two-part series, we will outline some of the world’s weirdest insects.

If you think that the site of a cockroach crawling along a sidewalk or the thought of a bug that resides in beds and hosts on humans is freaky, you are sure to find that you are beside yourself after learning about the weirdest insects that we will cover in this series!

The Devil’s Flower Mantis is considered to be one of the absolute strangest of all insects to roam the planet. This insect utilizes natural color patterns that directly mimic a flower to lure unsuspecting prey. Once within the vicinity of its reach, this insect reaches out and snatches up the insect that has fallen into its trap. According to researchers, this is considered to be the most famous of all insects that are part of the mantis species.

These insects are quite large. Females and males may reach up to five inches in length; however, the males are said to have slenderer bodies and they also possess a feathered-type antenna. In evaluating this species up close, it looks exceptionally frightening; however, it is a very skittish creature that seems to experience high levels of stress very rapidly.

These insects consume a variety of flies – blur bottle flies, green bottle flies, fruit flies, and house flies. While they may consume other insects, this is not common practice as the Devil’s Flower Mantis typically becomes ill after eating varied insects.

Despite its mild ways, one look at this other-worldly creature and you are sure to get the jitters! 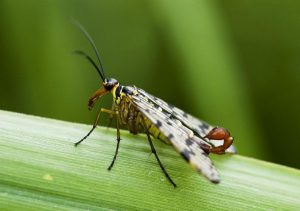 Just when you thought mosquitoes were the greatest of all evils when it came to flying insects, scientists discovered the Scorpion Fly. Yes, you guessed right, the appearance of this ghastly insects reflects a combination of a vicious scorpion and a scary wasp.

These insects live in gardens, the edges of woodlands, and hedgerows. The head of the insect contains a projection that resembles a beak. This is used to feed and engage in scavenging. The tail that resembles the end of a scorpion is actually used in courtship for display purposes.

These insects are most often observed during the months of May, June, July, August, and September. While the Scorpion Fly is not considered to be harmful to humans, if you see this insect, you are sure to run the opposite direction!

This particular insect is often referred to as the “Pale Tussock”. This transitions into a type of moth that resembles a sponge – from a distance; however, as you get closer to the insect in its caterpillar stage, you will be immediately taken back by the double row of vicious-looking teeth, spike-like hair that looks like sharp porcupine quills, and a forehead that looks like something out of a syfy movie featuring other-worldly aliens!

These caterpillars are attracted to the light and generally transition into a moth and start to fly in the summer months.

Be certain to join as next week as we continue to expound on the weirdest insects in the world! To bookmark us, visit: https://allpest-thoroughcheck.com/blog/